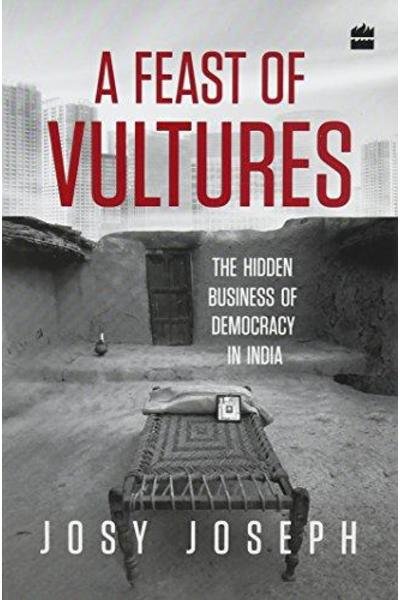 A Feast of Vultures

A tour to force through the wildly beating heart of post-socialist India, the book is a must-read for anyone interested in understanding the large, unwieldy truth about this nation.

‘Every day, millions of people – the rich, the poor and the many foreign visitors – are hunting for ways to get their business done in modern India. If they search in the right places and offer the appropriate price, there is always a facilitator who can get the job done. This book is a sneak preview of those searches, the middlemen who do those jobs, and the many opportunities that the fast-growing economy offers.’ Josy Joseph draws upon two decades as an investigative journalist to expose a problem so pervasive that we do not have the words to speak of it. The story is big: that of treacherous business rivalries, of how some industrial houses practically own the country, of the shadowy men who run the nation’s politics. The story is small: a village needs a road and a hospital, a graveyard needs a wall, people need toilets. A Feast of Vultures is an unprecedented, multiple-level inquiry into modern India, and the picture it reveals is both explosive and frightening. Within these covers is unimpeachable evidence against some of the country’s biggest business houses and political figures, and the reopening of major scandals that have shaped its political narratives. Through hard-nosed investigations and the meticulous gathering of documentary evidence, Joseph clinically examines and irrefutably documents the non-reportable. It is a troubling narrative, but also a call to action and a cry for change. A tour to force through the wildly beating heart of post-socialist India, the book is a must-read for anyone interested in understanding the large, unwieldy truth about this nation.

Josy Joseph is an award-winning investigative journalist. His stories have fostered public debate, and continue to contribute to significant policy and systemic changes in India. Among the investigative stories he has published are the Adarsh Apartment scam, Naval War Room Leak case, several aspects of the Commonwealth Games scandal, the 2G spectrum allocation scam, and other corrupt and nepotistic government decisions. The Prem Bhatia Trust elected him India’s best political reporter of 2010 ‘for his scoops and revelations, which include a list of scams that have become familiar names in the political lexicon’. In July 2013, the Ramnath Goenka Foundation run by the Indian Express group awarded him the Journalist of the Year in print media. Joseph is the National Security Editor of The Hindu. He lives in New Delhi with his wife Priya and daughter Supriya.