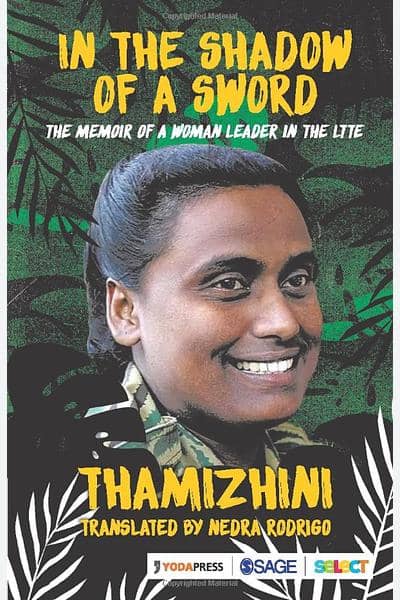 In the Shadow of a Sword: The Memoir of a Woman Leader in the LTTE

In the Shadow of a Sword is the memoir of a woman leader in the LTTE who also participated in the Peace Talks of 2002.

Thamizhini joined the Liberation Tigers of Tamil Eelam (LTTE) at the age of nineteen and spent eighteen years as a combatant, educator and, for some time, head of the women’s division of its Political Wing. Her memoir, In the Shadow of a Sword, weaves back and forth between reminiscences of her childhood experiences of state violence and her decision to join the LTTE. It recounts the many projects she undertook for the civilian population; her participation in the Peace Talks of 2002; the freedoms granted and constraints placed upon her during the armed struggle; and her experiences in combat training, on the battlefield, and in political negotiations and diplomacy. It is a narrative weighted with grief and remorse yet glistening with moments of humour and thick with compassion. The memoir contains wry observations on gender roles and media manipulation in times of war and is a valuable archive that rescues female combatants from oblivion.

When Thamizhini was a student at the Parandhan Hindu Mahavidyalaya (1991), she joined the Liberation Tigers of Tamil Eelam (LTTE). Having acquired much combat experience even as a young woman, she later became a functionary in the women’s section of the LTTE’s political wing. As a leader, she earned the respect of LTTE chief Prabhakaran, leaders like Anton Balasingham and Adele Balasingham, and the people she served. She participated in several high-level meetings and events that happened during that period, and interacted with several national and international leaders and representatives.

Nedra Rodrigo is a co-founder of the Tamil Studies Symposium at York University, and an external researcher at the York Centre for Asian Research. She is a Spoken Word artist who has been featured at Scream in High Park, Desh Pardesh and Masala Mendhi Masti, and whose poetry has been published in various anthologies. She has translated works by R. Cheran, V.I.S. Jayapalan, Puthuvai Ratnathurai, Rashmy, Kuna Kaviyazhakan and others. Her essays have been published in the International Journal of the Humanities, Global Tensions, Global Possibilities; Human Rights and the Arts: Essays on Global Asia; Studies in Canadian Literature and C Magazine.