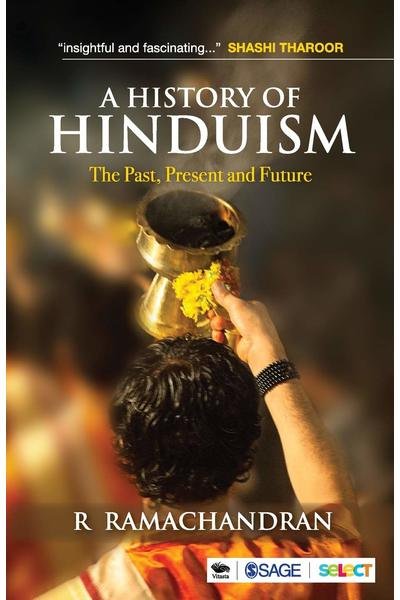 A History of Hinduism: The Past, Present, and Future

This book provides an all-encompassing landscape view of Hinduism as it has been for the last five thousand years.

Or, does the story of Hinduism begin with the descriptions of the ancient roots as revealed by archaeological findings and the evidence from present day tribal, village and regional cultures? This book looks at both. The history of Brahmanas, tracing their lineage to the fifty-odd Rigvedic poets, is dealt with through the chronological ordering of the Sanskrit texts which were first handed down to us as oral narratives from Gurus to shishyas. The circumstances and purposes for which these texts were written is examined, along with events of a true historical nature. This is followed by a sequential treatment of Hinduism as a ‘Rigvedic religion’, the two Mimamsas, Buddhism, Jainism, Dharmasastras, the Epics and the Puranas. The growth of Hindu temples, the role of Adi Sankaracharya and the Bhakti movement is delved into, and the influences of Muslim and British rule of the subcontinent on Hinduism is analysed.

The author explores one major reason for the survival of Hinduism—the support of prehistoric tribal and village cultures which were not modified or destroyed by the later-day Brahmanas. Much of tribal and village deities and practices were co-opted into concurrent Hinduism, so-much-so that today these cannot be separated from mainstream Hindu practices and traditions. They exist in all their colourful glory to this date and make Hinduism vibrant. It is these ancient folk religions that provide a stable foundation for the survival of Hinduism, argues author R Ramachandran, presenting in this book an all-encompassing landscape view of Hinduism as it has been for the last five thousand years. Finally, the present status of Hinduism is discussed along with its survival in the future.

The author is an indologist and retired professor of Geography from the Delhi School of Economics, University of Delhi. He has held positions as the Head of the Department of Geography, the Dean of the Faculty of Social Sciences, and the Director of the Delhi School of Economics at various points in time. His first book Urbanisation and Urban Systems in India was published in 1989 and has been reprinted every year since. After retirement in 1996, the author has been devoting himself full time to the study of Hindu scriptures in original Sanskrit.