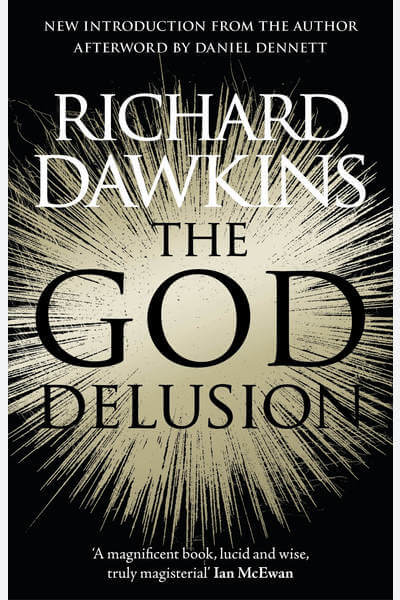 This book eviscerates the major arguments for religion and demonstrates the supreme improbability of a God.

In this book, Dawkins attacks God in all his forms. He eviscerates the major arguments for religion and demonstrates the supreme improbability of a supreme being. He shows how religion fuels war, foments bigotry and abuses children.

His argument could hardly be more topical. While Europe is becoming increasingly secularized, the rise of religious fundamentalism, whether in the Middle East or Middle America, is dramatically and dangerously dividing opinion around the world. In America and elsewhere, a vigorous dispute between ‘intelligent design’ and Darwinism is seriously undermining and restricting the teaching of science. In many countries religious dogma from medieval times still serves to abuse basic human rights such as women’s and gay rights. And all from a belief in a God whose existence lacks evidence of any kind.

Dawkins is the Charles Simonyi Professor for the Public Understanding of Science at Oxford University and a fellow of New College.

The Selfish Gene catapulted him to fame and remains his most famous and widely read work. It was followed by several bestselling books: The Extended Phenotype, The Blind Watchmaker, River Out of Eden, Climbing Mount Improbable, Unweaving the Rainbow, The Ancestor’s Tale and a collection of his shorter writings A Devil’s Chaplain.