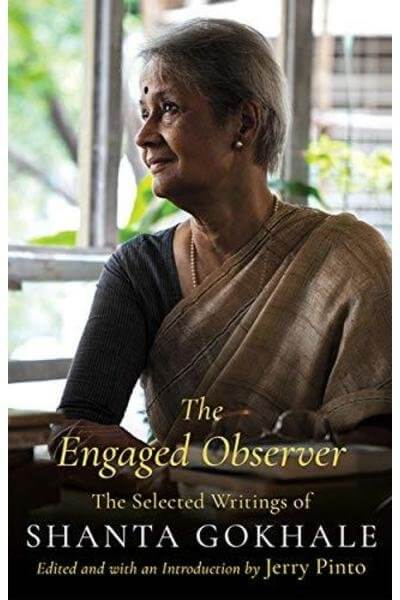 Candid, intense and often humorous, The Engaged Observer is also an invaluable record of the social, political and cultural changes that have taken place in Bombay, Mumbai and beyond.

A collection of writings by an incandescent and gloriously eclectic intellectual of contemporary India.

For over four decades, Shanta Gokhale has entertained, informed and challenged us with her insightful, witty and forthright writing in both English and Marathi. With rare objectivity and consistency, Gokhale has tried to decode our unique social etiquette while subtly exposing our hypocrisies, and celebrated tradition-defying women while forcefully criticizing the patriarchal and misogynistic structures of society. Her essays on theatre not only illustrate its evolution in India, but also provide arresting portraits of theatre personalities such as Satyadev Dubey, Vijay Tendulkar and Veenapani Chawla. And her detailed yet accessible articles on Indian classical music are a delight to read.

In her short stories, she shapeshifts effortlessly from old men to teenage boys and college students. And finally, her two takes on Shakespeare show us how the Bard’s ideas continue to remain relevant and, more importantly, how little attention he paid to his women characters.

Candid, intense and often humorous, The Engaged Observer is also an invaluable record of the social, political and cultural changes that have taken place in Bombay, Mumbai and beyond.

Shanta Gokhale is a novelist, playwright, translator, cultural critic, columnist and theatre historian. She has written two novels in Marathi, Rita Welinkar and Tya Varshi. Both won the Maharashtra State Award for the best novel of the year and have been translated by her into English. Apart from several plays, she has also translated Smritichitre: The Memoirs of a Spirited Wife by Lakshmibai Tilak and the novel Kautik on Embers (Dhag) by Uddhav J. Shelke. She has written and edited several other books on theatre, including The Scenes We Made: An Oral History of Experimental Theatre in Mumbai.

In 2016, Shanta Gokhale received the Sangeet Natak Akademi Award for her overall contribution to the performing arts.

Jerry Pinto is a Mumbai-based Indian writer of poetry, prose and children’s fiction, as well as a journalist. Pinto writes in English, and his works include, Helen: The Life and Times of an H-Bomb which won the Best Book on Cinema Award at the 54th National Film Awards, Surviving Women and Asylum and Other Poems.