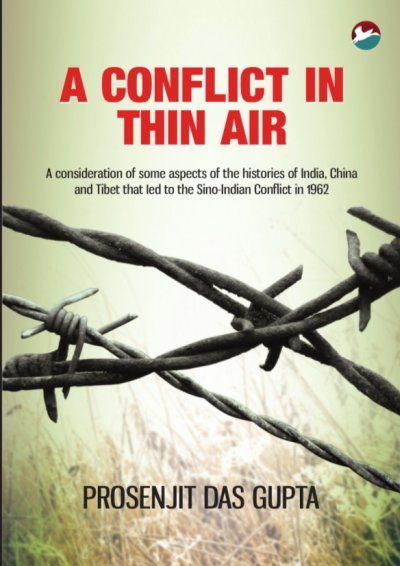 A Conflict in Thin Air

In this book, the author has considered aspects of the histories of India, China and Tibet that led to the Sino-Indian Conflict in 1962.

Was the Sino-Indian war in 1962 really about a disputed border? What really happened at the Simla Conference in 1913-14 that led to the “McMahon Line”? Or, was there more to it, somewhere beyond the meetings and discussions between the two sides, the exchange of diplomatic notes, perhaps out of sight, and lost in the pages of history?

In A Conflict in Thin Air the author has attempted to unravel the tangled threads of history of China and Tibet from ancient times, in the 8th century, when both were almost evenly matched powers, and then between the 18th and the 20th centuries when there were frequent attempts at domination of Tibet by China and the equal persistence of Tibet in its independence. The study then moves to more modern times in the 19th century when British India had to confront Tsarist Russia and Imperial China, and later, in the course of the 20th century, in dealing with Nationalist China and then with Communist China.

The work attempts to break out of the frequently-held view of an intransigent India and a wronged China, and take into account the wider issues of the world-views of the political leadership of the two countries. The border war was merely the symptom of far deeper differences.

Prosenjit Das Gupta was born in Calcutta in 1944 and studied at the St. Xavier’s Collegiate School and the Presidency College. While his graduation was in Economics and, he worked for more than 42 years in chambers of commerce and allied organisations, he became deeply interested in wildlife and (as a corollary) in tribal life in India, and began writing articles in newspapers on these subjects. This culminated in his two books, “Walks in the Wild” (later revised and enlarged as “Wild Experiences”) and “Chasing a Dream”, as well as to research in other areas, that led to his writing “10 Walks in Calcutta”, “Eco-Yatra” (on changes in economic policies in India) and, recently, “Issues and Idioms” (on changes in political approach and discourse in India over the last 60 years).

Das Gupta is widely travelled in India and abroad. He is still engaged in research on different aspects of life in India, and hopes one day to write about his travels in Egypt, Turkey, Greece and Italy as well as to various ancient historical sites in India.