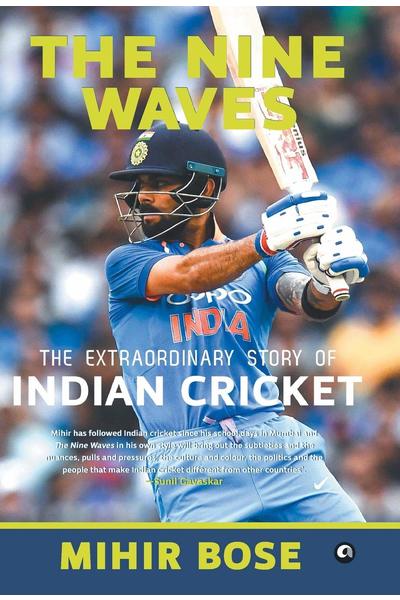 The Nine Waves: The Extraordinary Story of Indian Cricket

This is the most entertaining and comprehensive book on Indian cricket. Once dismissed by the English as the dull dogs of cricket, India is now eagerly courted by all cricketing nations.

The Nine Waves is a tour de force. The most entertaining and comprehensive book on cricket in this country to be published yet, it tells the story of the nine great waves that have rolled through the history of Indian cricket, from India’s international debut in 1932 to the incredible achievements of Virat Kohli’s team today. Each wave or era was chock-full of mesmerizing stars, thrilling moments, great victories, heartbreaking losses and significant turning points—this book tells the story of each of them in great detail.

The first wave of Indian cricket rolled in against the background of momentous changes in the country and the world: Gandhi’s civil disobedience campaign, World War II and India becoming independent. Through each of the successive waves, India strengthened its position in the cricketing firmament. Towards the end of the twentieth century, it became the most powerful nation in world cricket—the prowess of the national team today matches the economic strength of the cricketing establishment.

As a five-year-old, the author saw Vijay Hazare, India’s first test-winning captain, play. Since then he has been witness to some of the most dramatic moments of Indian cricket: India’s first win in England in 1971, Kapil Dev lifting the World Cup in 1983 at Lord’s, Tendulkar’s first Test century at Old Trafford in 1990, Sunil Gavaskar scoring his 30th Test century, the 2011 World Cup in India where M. S. Dhoni emulated Kapil Dev, Virat Kohli in 2018 in England proving he is the best batsman in the world today and much much more. He brings to the book his first-hand experience of some of the most seminal moments in Indian cricket, his encyclopaedic knowledge of the game and his unrivalled ability as a chronicler of the sport to create a magisterial history of Indian cricket.

Once dismissed by the English as the dull dogs of cricket, India is now eagerly courted by all cricketing nations. On the field its cricketers are displaying skills which make India a worldbeater. Over a billion Indians, the greatest fan base in the world, treat their cricketers as demigods. The book is a fitting testimonial to the game’s only superpower.

The author is a London-based award-winning author and journalist. His History of Indian Cricket was the first Indian cricket book to win the UK’s Cricket Society Literary Award. In the UK, he has won Business Columnist of the Year and Sports Reporter of the Year. Loughborough University awarded him an Honorary Doctorate for outstanding contribution to journalism and promotion of equality. His 28 books range from biography, including one on Subhas Chandra Bose (no relation), history, business, sport and the only narrative history of Bollywood. His most recent book, From Midnight to Glorious Morning?, charts how India has changed since Independence.