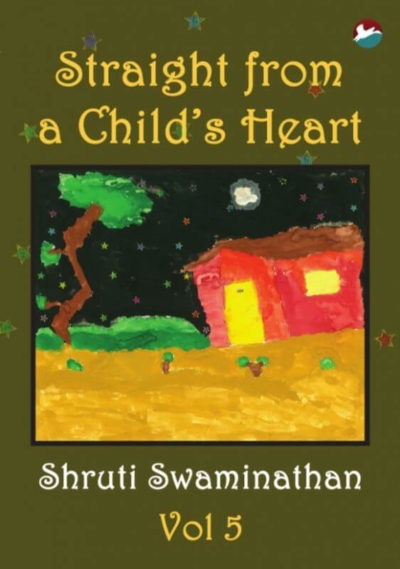 Straight From A Child’s Heart – Vol.5

Straight From A Child’s Heart is Shruti’s first book which is a collection of five stories. A good, fun book to read for children.

In this volume, the author introduces her pet, Timmy, a talking dog. We see in the stories of her pet, a range of emotions – the pain of losing somebody to someone else, pangs of separation, a spark of hope, jealousy, romance, grief, anger and finally, starting anew. There are other short stories such as Baby Boo for Siva which revolves around how an individual repents his hastiness (though not in that moral-lecture way). Ever heard of a talking fan? Just open these pages to read a conversation between a talking fan and a mechanic. The Rebel’s Wife deals with the subject of keeping that spark of hope alive and Uncle Turns Chef reminds you not to be so absorbed in your work! Cricket in My Country’s Villages is a story of an interesting visit to a village in India. One Door Closes tackles a sensitive yet important subject. The Lamp of Hope is based on the aftermath of 2004 tsunami. We come back with some more poems such as how it is to be turn a teen, if an old lady can still be pretty and the uses of trees.

Shruti Swaminathan is a young author. She is a student of Class VIII at Kendriya Vidyalaya, IIT, Powai, Mumbai. She has three self-published books of short stories to her credit. The first book was published to coincide with her tenth birthday; the second and third books, every year thereafter. Though her first book was brought out when she was ten, her foray into writing began in 2007, when she was six years old. She wrote her first story for the school magazine when she was in Class 1. Initially, she wrote her stories, for a few months, in a diary and then began typing them out in a laptop. To this day, she has been steadily adding to her collection of stories – she spends at least an hour, everyday, typing stories, unless she is suffering from “the writer’s block”.

She reads the newspaper keenly, before leaving for school and has a fairly high level of general awareness. She also watches, with avid interest, evolving news stories on television. Her keen observation of the current events of the day provides inspiration for some of her stories and had also prompted her, at the young age of seven, to design a newspaper covering the current topics of interest, sports, general information and entertainment. Around the same time, during her holidays, she wrote out content for English language textbooks for primary school students, as a past-time. In short, the printed word interests her.

This has helped her to do well academically, too. In the year 2011, she secured a High Distinction in the IAIS (International Assessment for Indian Schools) conducted by Macmillan in collaboration with the University of New South Wales, Sydney, Australia. In the same year, she was also the school topper in the International English Olympiad conducted by SOF(Science Olympiad Foundation) in the Hindu Senior Secondary School, Indira Nagar, Chennai, 2nd in the city of Chennai, was ranked 4th in the State of Tamil Nadu and ranked 41st internationally. She was recognized as a “Young Achiever of 2011” during the Annual Day Celebrations held in her school, Hindu Senior Secondary School, Indira Nagar, Chennai. In 2013, she topped her school, Kendriya Vidyalaya, IIT, Mumbai in the 6th All Mumbai SPELLING Competition held for Classes 7, 8 and 9.